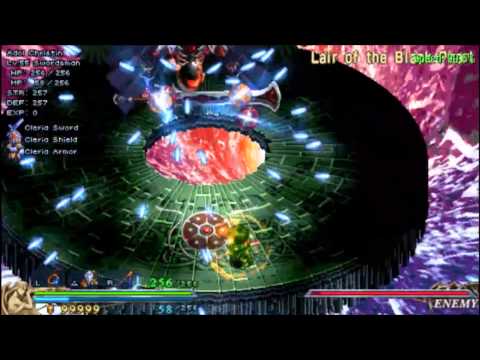 The final boss in the game. Darm is not a very difficult boss if you have both an Elixir and Shield Magic equipped. The Shield Magic lets you take damage to your magic bar so it acts like a second health bar. The Elixir lets you revive once if you run out of health. Like Dalles, magic is useless and you need to kill him by bumping into him.

Darm will start off his first phase by shooting out lots of bullets or pelting you with his bombs. They are not too difficult to dodge but they do a sizable amount of damage. After you bring him to less than half his health (roughly more than one life bar), he will shed off his grim reaper cape and show off the black pearl. This phase is a lot harder to hit him in since his hitbox is smaller. Also, he has a very dangerous attack where he shoots yellow bullets in a small curve which does a ton of damage without Shield Magic. The best time to attack him is during the laser which should be done behind him.