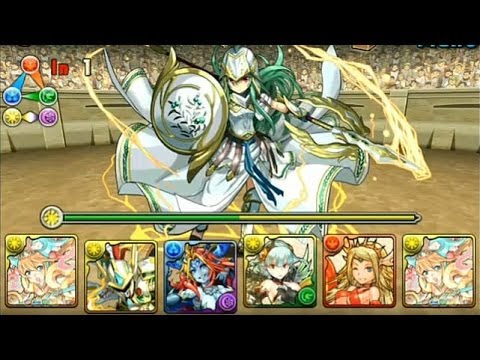 GUIDE FOR GETTING *FREE* MAGIC STONES ON iOS:

My second clear of the Athena Descended dungeon. My first clear was with Kirin too but it took a couple stones. Entirely my fault, my matching was very bad! You’ll notice some mistakes in this run too, just not my day 🙂

2. Gigas provides you with a few turns to safely charge skills, do not kill him on your first turn! Gigas’ “attacks” will count down to his real attack. If he gets to attack, he will one-shot kill you with a 99,999 damage hit.

2.a Depending on his starting counter, you can get 3-4 free turns. Use the opportunity to set up the board for a large Kirin combo, then take him out in one shot when he shouts “1” at you; this means he’ll attack next turn.

3. Cu Chulainn is fairly tough since he has a low HP (32) count but a high defense (600,000) attribute. To survive this wave, a Kirin team must save up and ratio hearts. Just attack with regular attacks unless you’re about to die; it’s very unlikely you can break his defense unless you burn your orb changing skills.

3.a When above 50% HP, Cu Chulainn hits for between 4773 and 10230 per turn. He can use a skill which deals 4773 damage and changed random orbs to jammers; this can be your heart orbs, which could mean trouble!

This means that you should only match heart orbs after he uses Pitch Black Assassin’s Dagger and only enough to heal above 8524 HP. Budget your hearts properly and you will make it through!

3.c If Cu Chulainn is just about to die but his last attack was Finale, make an empty match to charge for one extra turn. Remember, Pitch Black Assassin’s Dagger will always follow after Finale and this attack can’t kill you. Siegfried will heal you to 100% at the start of his wave anyway.

4. Siegfried is fairly straightforward. His hitpoint pool is large enough to most likely need 2-4 Kirin combos. He deals 16,275 damage every two turns above 50% HP and 20,460 damage below 50% HP. His first action will be an “ATK Up” skill, so you have 3-5 turns to defeat him before he attacks.

4.a Even if you can survive a hit for 16,275 damage, tanking Siegfried is not recommended with a Kirin team. This attack will not just damage you buy also change a random orb type into blue orbs. Since Kirin depends on having four different colors on the board to activate, this can spell trouble!

4.b His “below 50% HP” attack is more straightforward. It just deals damage. Most Kirin teams can’t take this much of a beating however!

5. Athena is pretty straightforward too and actually one of the easier encounters of this dungeon. Her first action will be a status shield, so pop Echidna right away. Then pop your Kirin’s gravity (both of them) and go to town. Use your orb changers too for the damage boost when appropriate!

5.a You should be able to take her out before Echidna wears off. If not, don’t fret; her first “attack” is a status shield so that is a free safe turn. She can also be tanked to some degree by most Kirin teams for at least a turn or two:

Above 50% she deals either 9292 damage OR 7434 damage. The latter attack also changed a random orb type to yellow, which can be a problem for Kirin teams!

Below 15% HP, she’ll do one empty attack as a warning; all subsequent attacks will instant kill you by dealing 92,920 damage.

In retrospect, I think a Parvati (especially skilled up) may be better than Valkyrie on this team. Makes Cu Chulainn safer and Athena herself isn’t that hard to burst down.