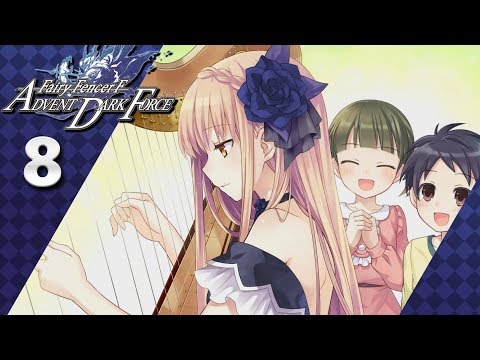 Fairy Fencer F: Advent Dark Force Part 8! We head to Solaru village and meet the Lovable Zenke and get involved in some kind of tournament! Tiara ends up getting captured! But at least we get to see what Dorfa is really all about!

Long ago there was a battle between a Goddess and the Vile God. The two Deities created a large quantities of weapons to battle each other. The battle was long but eventually the battle ended with both of them falling into a deep slumber awaiting to be awakened. Present day the remaining weapons (Known as Furies) used in the battle are found throughout the world and anyone who wields one is known as a Fencer. A Fencer’s duty is to collect the Furies and revive the Goddess in order for them to have their wish granted. We follow Fang who one day gets hungry and decides to pick up a Fury in order to wish for food. But after finding himself in Jail he discoverer he can use Eryn’s power to Fairize and Transform to gain power. He then agrees to join Eryn on the quest to obtain the rest of the Furies (Mainly for Food). Quickly the pair bump into another Fencer known as Tiara (and Qui!) and decide to join forces in order to obtain the rest of the Furies!

Fairy Fencer F: Advent Dark Force is a Remake of Fairy Fencer F for PS4 that was originally released on PlayStation 3 and PC. Gameplay for this Let’s Play/Walkthrough will recorded at 60 FPS. We will also be doing this series on Hard! (May drop down to Normal if it gets scary!)

Fairy Fencer F: Advent Dark Force has much more depth in terms of story compared to the original and has two separate routes based on which Deities weapons you choose to obtain from Godly revival.

If you like my Fairy Fencer F: Advent Dark Force playthrough be sure to share and like the videos! It all helps! And if you want to see more be sure to subscribe: https://www.youtube.com/user/TheTwitGamer?sub_confirmation=1

Let me know what you think of Fairy Fencer F: Advent Dark Force by leaving a comment or you can reach me at: