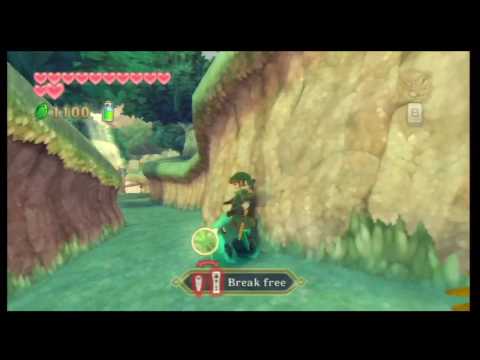 In total there are 10 medals that are obtainable. Most are found in Goddess Chests and each medal takes up 1 pouch space.

Medals in the order I get them:

Kill the Keese, stand a little before the part of the tree that juts out, and look toward the Viewing Platform. Walk to the ledge and hang off of it. You should see 2 land masses connected by a tightrope. If it looks like you’ll land on the land mass to the right then drop down. Otherwise adjust your position and then drop. From here you should Skyward Strike the Goddess Cube (or if necessary use the tightrope to get closer) and head up to the sky.

(0:51) The Goddess Chest containing the medal is found on an island in the northeastern part of the Thunderhead. Land on the island and Clawshot your way up to the chest.

#2 Rupee Medal #2 (1:58): Back in Faron Woods, the closest bird statue to this Goddess Cube is “Forest Temple”. Otherwise just head to Skyview Temple.

Go to the right of (if facing) the Skyview Temple entrance and there’ll be a set of stairs. High up on the temple wall near the stairs is a set of vines that you can Clawshot to. From there, Clawshot to a nearby 2nd set of vines and climb up to find the Goddess Cube.

(3:34) This Goddess Chest is found on Beedle’s Island. Go to Skyloft and sleep in the bed found inside Beedle’s Airshop to get to his island. Head outside and take the ladder up to reach the chest.

It’s possible to get this chest during the day by diving off your Loftwing, but it’s much harder. Also if you have the money there are a couple medals for sale in Beedle’s Shop if you want to grab them while you’re here.

#3 Treasure Medal (4:13): Go to Eldin Volcano and land at the bird statue called “Temple Entrance” if possible, otherwise land wherever and head to the Earth Temple entrance.

Go to the right of (if facing) the Earth Temple entrance and run through the little Bokoblin camp and you’ll find a little pathway downward leading to the Goddess Cube.

(4:46) This chest is found on an island in the northeastern part of the sky. This island has an upper and lower level. Land on the upper level and climb the vines down to find the chest in an alcove.

#4 Heart Medal #1 (5:38): In Lanayru Desert the best bird statue to land at is “Stone Cache”. If you look at your map you’ll see a sort of loop in the northeastern part of Lanayru. Head for the lower path of the loop and you’ll come to a cracked wall. Blow it up and follow the path to the other end of the loop to find the cube.

(7:24) The chest is on an island in the northeastern part of the sky. Dive into the pool of water and the chest will be on the other end.

#5 Life Medal #1 (8:24): In Lanayru Desert the closest bird statue is “Desert Entrance”. Go over to the place where you found the robot in the cage on your first visit to Lanayru. Near here there’s a Goddess Cube on a raised walkway. Use the Clawshots to get onto the walkway then go over to the cube.

(9:10) You may wish to wait on getting this chest as the chest for medal #7 is on this island as well.

The chest is found on an island in the southwestern part of the sky and is actually a pair of islands. Land on the only part that you can and climb down the vines on the side to reach the chest.

#6 Heart Medal #2 (10:17): From the Goddess Cube from #5, there is a nearby sandy area with a couple shrimp guys. The Goddess Cube is on a small piece of land against the wall in this sandy area. If you made a shortcut by pushing the mine cart down then use that to get to the cube otherwise go through the sand.

(10:42) The chest is on an island in the southern part of the sky. The chest you want is on the lip of land outside of the volcano part.

#7 Potion Medal (11:25): Once again in Lanayru, land at the bird statue called “Skipper’s Retreat”, otherwise go to the Ancient Harbor and use the boat to get there. Navigate your way through Skipper’s Retreat as if you were headed up to his house. When you reach the Moblin on the bridge, walk passed the little treasure chest and use the Clawshots on the dry vines on the rock structure. Use the Clawshots on the 2nd set of vines and climb up to the cube.

(12:57) This medal is on the same island as medal #5. Instead of using the vines, Clawshot into the caged area of the 2nd island to get the chest.

#8 Cursed Medal (13:30): After you get at least 30 Gratitude Crystals go talk to Batreaux and a chest containing the medal will appear.